One of the things that I like the most about Danielle Walker of Against All Grain’s recipes is that she lives in the real world. She has a husband and a young child, so when she writes her recipes, they don’t usually involved any crazy techniques and hours of preparation. This recipe, from her book Against All Grain is super simple to make. It doesn’t involve a ton of ingredients and it cooks in the crock pot. I paired it with a side of steamed veggies here, but I bet it would be delicious over some cauliflower rice.

When I got my hands on Nom Nom Paleo’s book Food for Humans, this recipe jumped out at me. First, because it looks delicious (although maybe not in my picture), but secondly because it’s super easy to make. It only uses 3  or 4  (if you use the optional garlic) ingredients, and it takes maybe 10 minutes of prep work. The hardest part is going to be smelling it for the 16 hours that it takes to cook.

I tried some as I was shredding it, and then made my husband try some. Then we just stood there, eating it as we were shredding it. (Because we’re civilized like that….) Also, I couldn’t find Red Hawaiian Sea Salt, so I just used the highest quality sea salt that our grocery store carried. It was delicious nonetheless. For those of you that don’t have the book yet, the recipe also happens to be right here on their blog. Horray!

Pineapple and chili? Sounds interesting, but tastes delicious. I first made this recipe from Civilized Caveman Cooking Creations when I was still pregnant. The idea was that I would make some food, and freeze it in individual portions so that once I delivered, I’d have absolutely no excuse to eat from a window. I was trying to plan ahead and set myself up for success. Here’s the problem….this stuff is delicious. And, despite my constant, never ending morning sickness, I could keep this down. So, I’d make a big batch, freeze the portions and eat them. I seriously did this like three or four times before giving birth. I did end up with few portions by the time I gave birth, but not nearly as many as I should have had…..I cooked mine in the crockpot though, and used ground bison instead of ground beef. Bison is higher in protein, Omega-3s, iron and B-12 than beef, is lower in calories, and is more likely to be grass fed, and free from growth hormones and other crap. It can be pricy at a grocery or health food store, but we’ve found it at Costco and Sam’s Club priced really reasonably, especially when compared to grass fed-beef. I also used my madolin slicer to save time chopping all of the ingredients, and while I’m not sure if the plastic emits any crazy chemicals into your food as it cooks (they say it’s perfectly safe), I used a crockpot liner to make cleanup easy. It freezes beautifully as well, so I always try and freeze a few portions so that I  always have a healthy option in the freezer just in case my day is crazy or unexpected guests show up. This dish has also been a hit with our Paleo and non-Paleo friends as well. 🙂 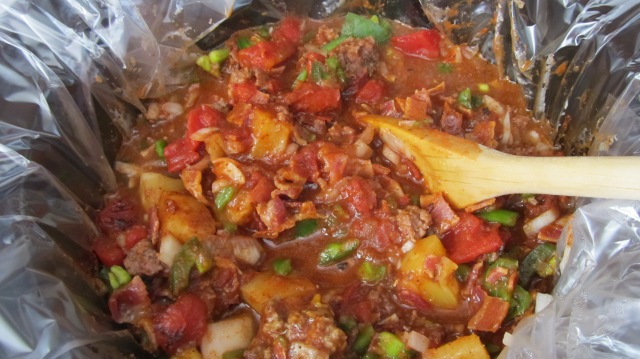 My Tweets
Follow Adventures of a Cavemom on WordPress.com